An eldritch beast rises out of the dark wretched waters in front of the ancient elvish gate. Great tentacles slither out from underneath it; reaching out for you as it snaps its angry maw. What do you do?

The Deep Dark is a minimalist tabletop role-playing game about dungeon delving.  It uses modern game design to accomplish an ‘old school’ feel. The Deep Dark has been said to be PBtA meets OSR. The PBtA mostly GM facing with Principles for the GM, and skills like 'moves'. OSR then player facing a strong focus on player ability in fictional positioning and advantage.

The Deep Dark conforms to many of the common assumptions of modern dungeon delving role playing games. You can expect to see attributes, classes, levels, xp, treasure and monsters.

Some aspects that stand out as less common:

Some things unique to the Deep Dark

Each class as a unique skill list, and each skill provides your character with a special ability or advantage.

The Arcanist's Experimenting skill may be used to turn monstrous abilities into known spells!

This book provides rules for creating characters and running them through perilous adventures.

Light is super important in the Deep Dark, and modifies every roll made with the dice!

Not only does the GM section have principles for the GM to run the game, but provides rules for complicating the characters' lives,  generating and stocking dungeons, and rules for treasure!

Returning to town to restock and sell loot is almost as important as delving into the deep in the first place. Town is fully mechanized with detailed locations, each with its own purpose and advantage for character use. That is if you can afford it!

This PDF contains everything needed to run full games of perilous adventure!

In order to download this game you must purchase it at or above the minimum price of $5 USD. You will get access to the following files:

Support this game at or above a special price point to receive something exclusive.

Get the Deep Dark in print! 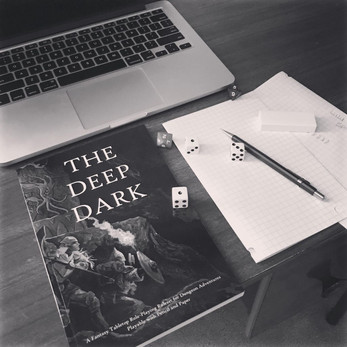